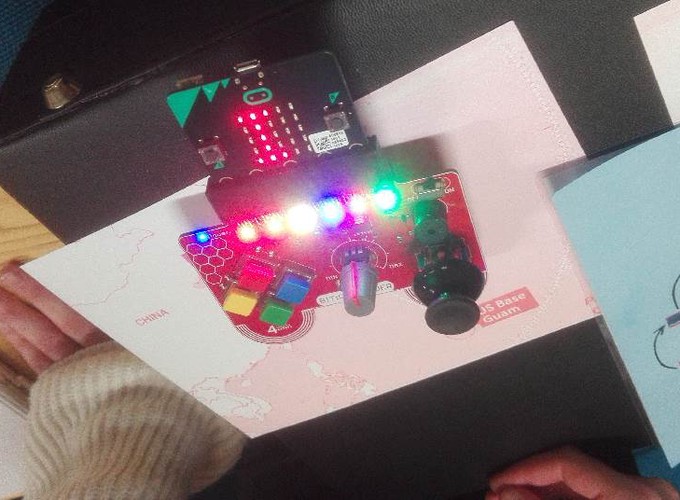 A fantastic project to share real-world game making with students and museums in Warwickshire.  You’ll have seen me (on here, twitter & at talks) ‘banging on’ about how successful Escape Room-inspired games would be in museums and here was an opportunity to create them in just a couple of days and then share with the public at MuseumsAtNight.

If you want to get straight down to the making you can jump to my somewhat thorough tutorial on Escape Games in Museums.

Let’s start with the MuseumsAtNight Event and then talk about the process afterwards.  This took place at Market Hall Museum in Warwick.  The Market Hall is a two floor museum in the town centre which has been redeveloped thanks to HLF investment and reopened around a year ago.  The majority of their evening events are historical talks so the MuseumsAtNight game playing represented a brave bit of programming.

Visitors could get a drink, explore the museum using glow sticks, play board games in the cafe or get involved in the Escape Games.  Here’s the flyer for the three games available:

The evening was a huge success and it was great to see people of all ages engaging with the games.  We had to run a waiting list as all three games were busy throughout the evening. Students ‘hosted’ their own games so they handled the intro, the reset process and gave out clues as required.  We also set up a copy of our ‘Deep Secrets’ game in the cafe area for visitors to play while waiting for their slot.  It also helped to explain the concept to players.

We had just 2.5 days working with the students from Warwickshire College to make & test games – in addition to the showcase as part of MuseumsAtNight (actually it was on #InternationalMuseumsDay so even more apt).

The workshop was split up with 1.5 days at Warwickshire College and two half day at the Market Hall Museum Warwick.

This was an extra curricular activity for the students so we started with a morning to introduce Escape Rooms to them. In small groups they got to play ‘Deep Secrets’, an Escape Room that we built just for this workshop. Afterwards we deconstructed the game and our development process.

The students had a harder task than our ‘Deep Secrets game’ – as their games had to respond to the museum: move players around the space and use the museum objects in the puzzles.

So we went on a brief reconnaissance to the museum to begin to understand the environment and how we could use it in the game.

Those students that were able to returned for the day long making workshop – the core of the work – where they planned out their experiences, stories, puzzles and clues.

All the games used two pieces of technology – a NFC-enabled mobile phone and BBC Micro:bit with BitCommander. The mobile phone uses Near Field Communication technology to trigger audio portions – story and clue elements. The BitCommander was used to enter codes. The codes in the games were all sequences of 6 colours (red, green, blue and yellow). These are entered into the BitCommander and then if correct a code scrolls across the Micro:bit that can be used to open a physical lock.

After the day of game making we had another morning in the museum where the students installed and playtested their games.  First students playtested their own games and then games were exchanged between groups.  We fedback and used what we’d learnt to tweak the games.

There’s a fantastic video of the project – it covers the workshops section and not the MuseumsAtNight event (thanks to Matthew Cox).

A massive thank you to Heritage & Culture Warwickshire in commissioning Birmingham Open Media to run this project.  It was a pleasure to work with Ben Neal to run the workshops and Louise Latter on the live events portion (a great BOM team!).  And so, so proud of our fledgling game designers from Warwickshire College who created fantastic games that kept the visitors completely engaged with the museum.

It absolutely proves that there is a huge appetite for these gaming experiences in museums. It’s really rewarding to work on projects like this with relative tight turnarounds culminating in live events and this model could absolutely be expanded on.  And clearly, there is a great deal of overlap between this and the more high-end museum gaming experiences that I’m currently working on (you’ll have to wait until I’m allowed to share more I’m afraid).  Until then – build you own Museum Escape Games with the tutorials here!