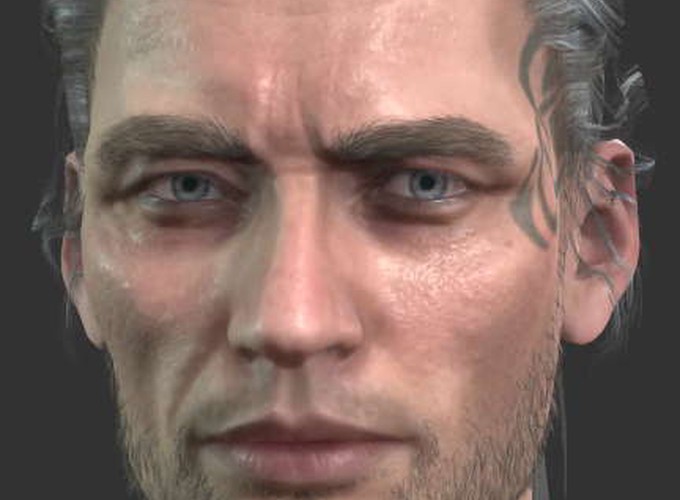 Wilhart is your guide as you conquer Mercia

Mercia is a game created for Tamworth Castle.

Mercia takes place in a small room on the top floor of Tamworth Castle in the newly developed Saxon galleries. It is designed for small groups and takes around 15 minutes to play.

In many ways it can be thought of as a semi-automated escape room. Puzzles are solved by interacting with a large touch table and require the players to interpret information from around the room.

The setup consists of a large 65-inch touch table as the central component. It has four multi-coloured light-up buttons positioned at the North, South, East and West sides of the room. In addition, there is a large screen mounted in portrait which contains your game host - Wilhart. Wilhart’s role is to support you during the game - offering explanation, advice and criticism. If you’re old enough to remember the original Crystal Maze - think Richard O’Brien. I’ll let Wilhart explain more:

Finally, there is additional information on the walls of the room. These walls contain all the information required to solve the puzzles on the touch table. 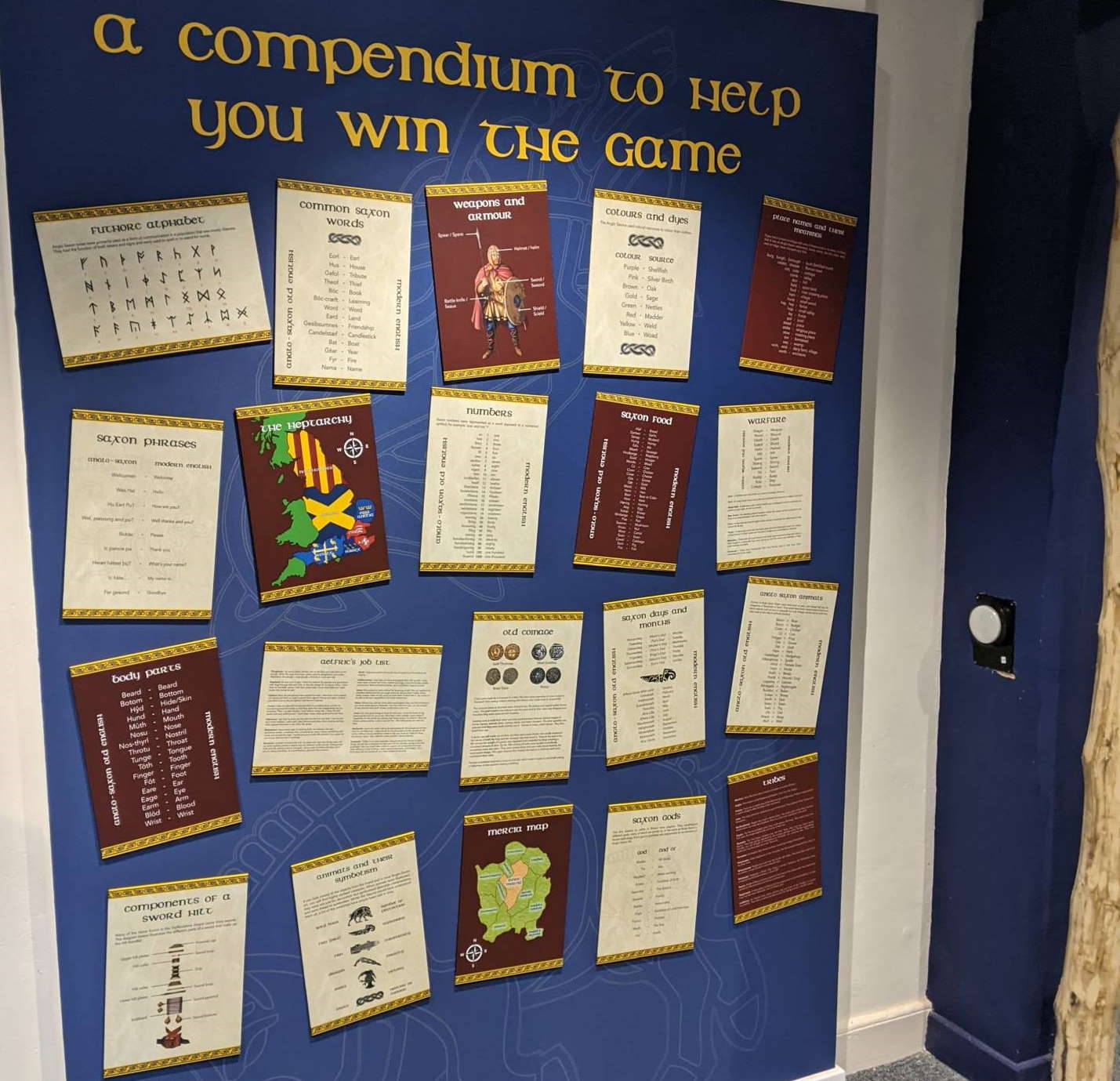 It takes a long time to install a new gallery in a museum! Who knew? (Actually, I’ve been involved in a bunch of projects that started from a blank gallery so it wasn’t a complete surprise). What I’ve always found useful to do is to visit the space frequently during the build - rather than just relying on everything to go perfectly from the point of the architect’s plans. This also meant that I was able to take photos throughout the build.

There are many different puzzle types and these are grouped into four categories: Visual, Logic, Knowledge and Skill. 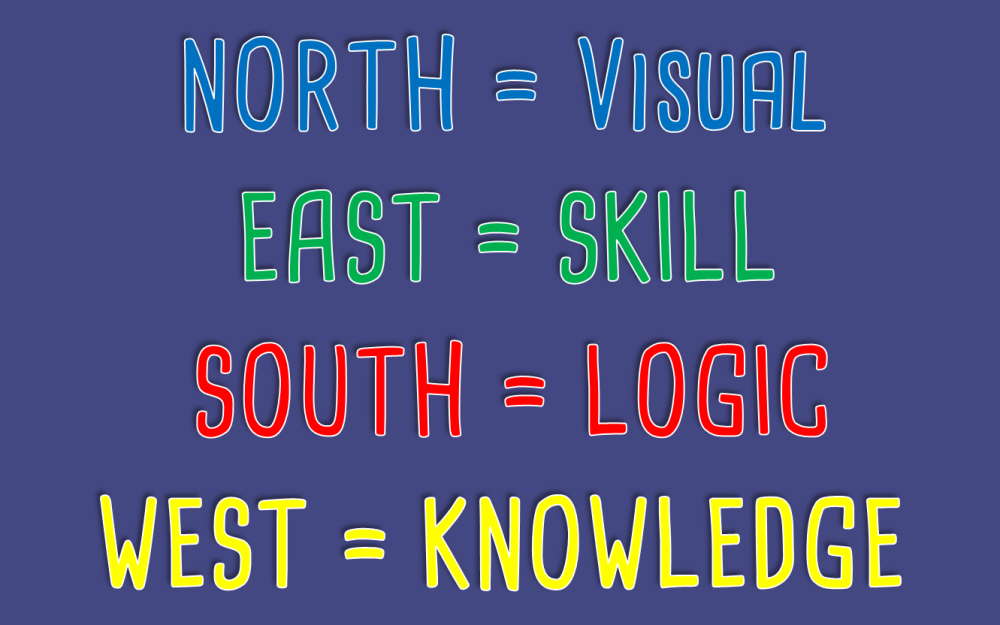 Players press the corresponding colour wall button to add their puzzle choice to the table.

These different puzzles are based on a variety of minigames so there is something for everyone. Including quizzes, word searches, spot the difference, jigsaw puzzles, colouring activities, memory and matching games. There are even puzzles that require you to decipher old English. 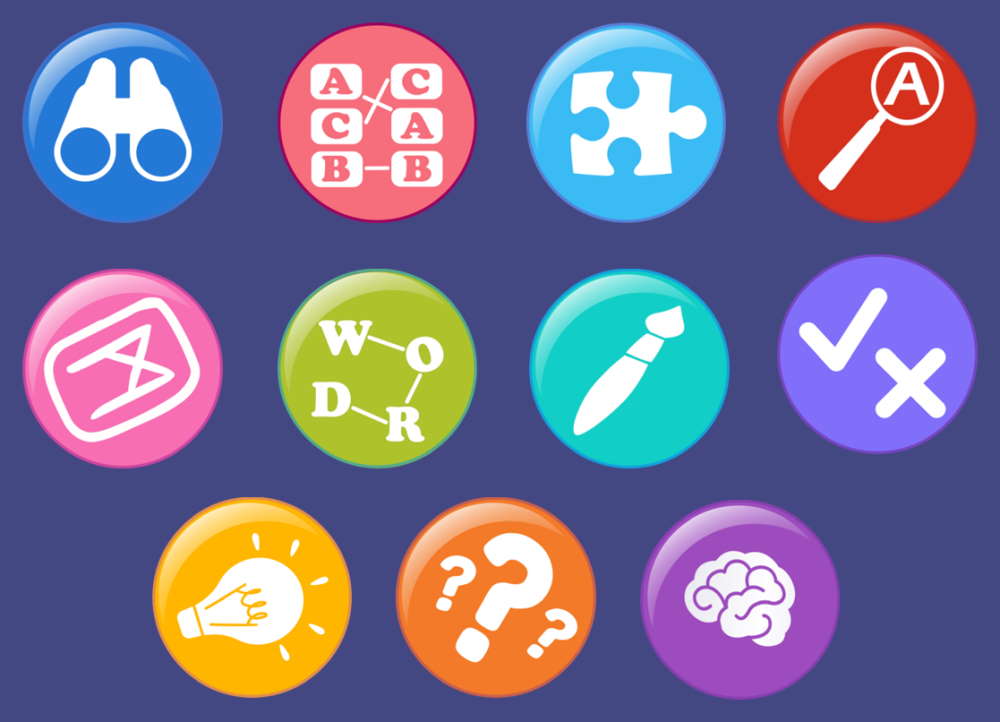 The game begins in 626 at Tamworth, known at the time as Tomtun. Tomtun is a small settlement around The River Tame. Much of what we now think of as the Midlands were groups of individual tribes. In the game it is the player’s goal to unite these tribes to increase the size of Mercia.

Solving the puzzles on the touch table rewards the players with riches which they can then spend to increase their lands. 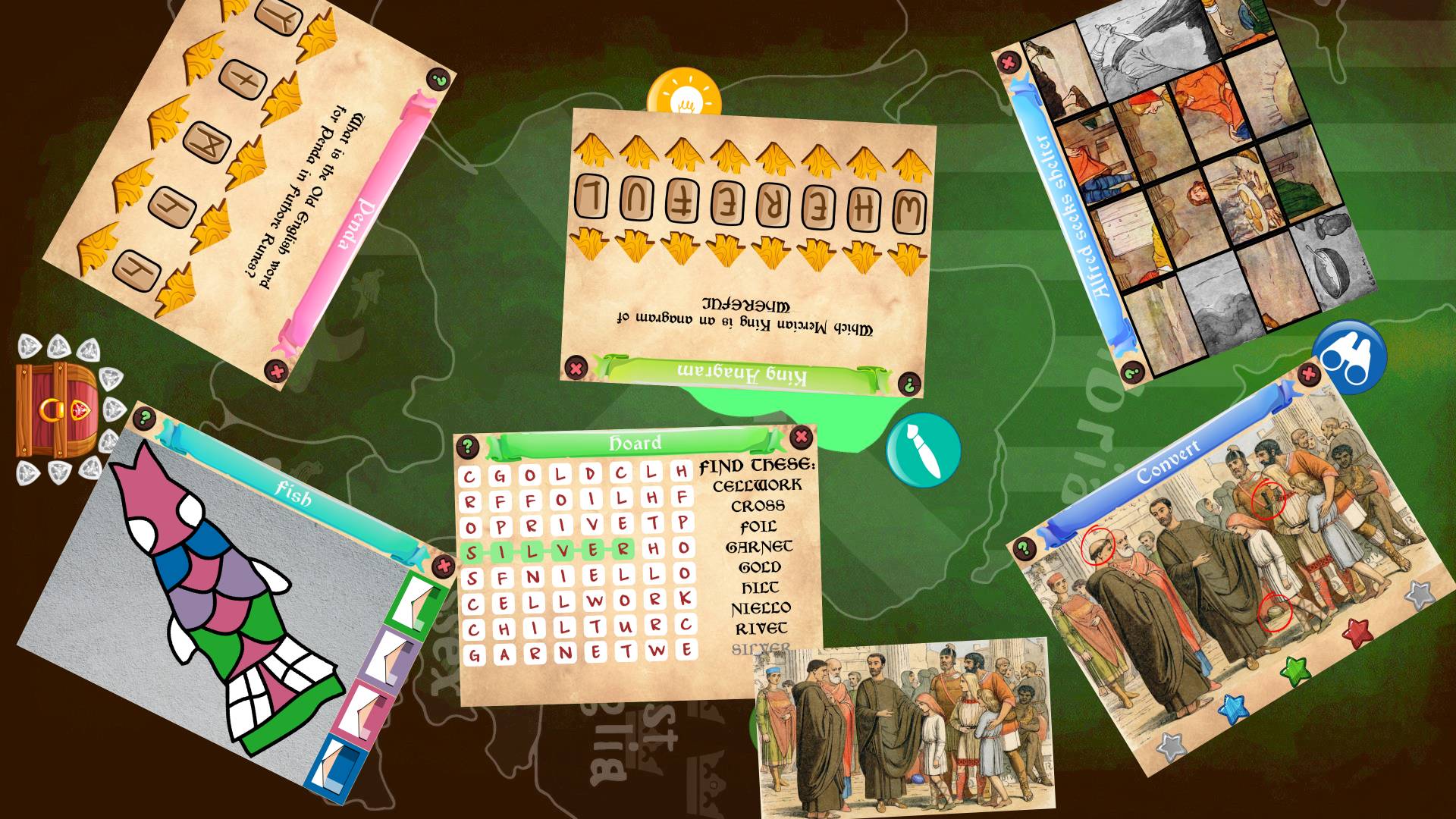 To give the game a sense of progress and drama, the end of the game focused on defending an invasion from Northumbria.

During the puzzle phase, players can choose to work individually or in small groups but for the final games, they must all work collectively as one.

In the final stages of the game, players must send horses around the kingdom to call on the men of Murcia to come to protect the kingdom against the invasion of Northumbria.

Once all the men of Mercia have arrived, they have to defend against Northumbria by creating a shield wall all and moving as one. In reality, this requires the players to collaborate by synchronised pressing of the coloured wall buttons. If successful players we’ll have united the kingdom of Mercia and protected it from the invasion of Northumbria.

The game is data-driven which allows the museum staff to continually update the puzzles on the table. Over time it is expected that they will create a larger bank of puzzles for the game to draw on.

This collection of hardware can run either the Mercia game or the Bubble Collection viewer. The bubbles viewer is an entertaining and interactive way to view Tamworth Castle’s collection.

The collection is grouped by category and each category swims around the screen as if they are a small shoal of fish. This is more of a playful interaction for visitors than just a standard catalogue of images. Visitors can bring up more information about each of these assets as well as this playing the information on the portrait screen in the Mercia room. Here’s a video which shows the revealing expansion of the bubble into an asset as well as the ‘throwing of content’ onto the second screen.

Over time the application selects assets to show you that it thinks you are interested in based on the ones you’ve been spending time with.

The bubbles application has other viewing modes which allow it to be used by museum staff for presentations.

Assets visible on the table relate to those found throughout the rest of the gallery. It is particularly rewarding to find an object in the gallery on the touch table and then throw the information related to it to the wall screen.

Again, the Bubbles application is data-driven, allowing Museum staff to update the assets on the table. 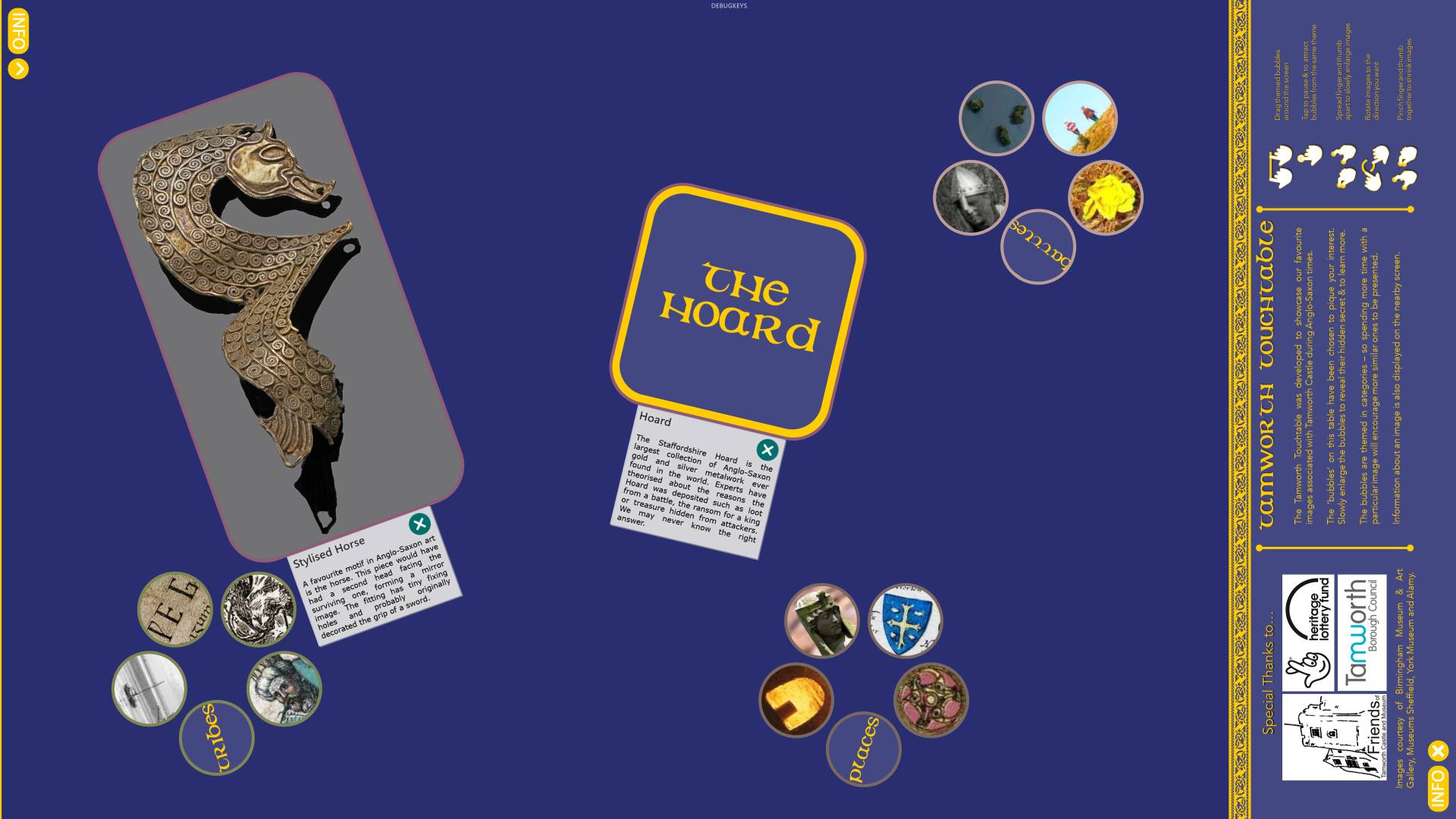 The entire system can be controlled by a series of NFC cards. This allows museum staff to quickly switch between applications simply by swiping a card on the side of the touch table. They also have a wider collection of cards allowing all actions to be quickly selected. This can be simple things like rebooting the machine or application-specific things like changing the difficulty of the game or switching bubbles into a presenter mode.

This project has been hit with a variety of delays, the final of which is being COVID, meaning that the development has spanned many years. It’s challenging when a project expands for a long period and has numerous different staff.

Even the technology has moved on during this period and the ideas we specified at the beginning of the project have had to adapt often for the better. For example, we redeveloped the Wilhart character at a much higher resolution and with improved animation. Although the downside of this delay was that the original voice actor was no longer available.

Overall, I’m very pleased with both the asset viewer and the multiplayer uh educational game. It certainly encourages players to move around the wall and look at the educational content closely while having fun.

The early feedback from the players has been very positive and I’m very much excited by the museum taking the puzzle development forward themselves now that they have a better understanding of the game’s overall experience. 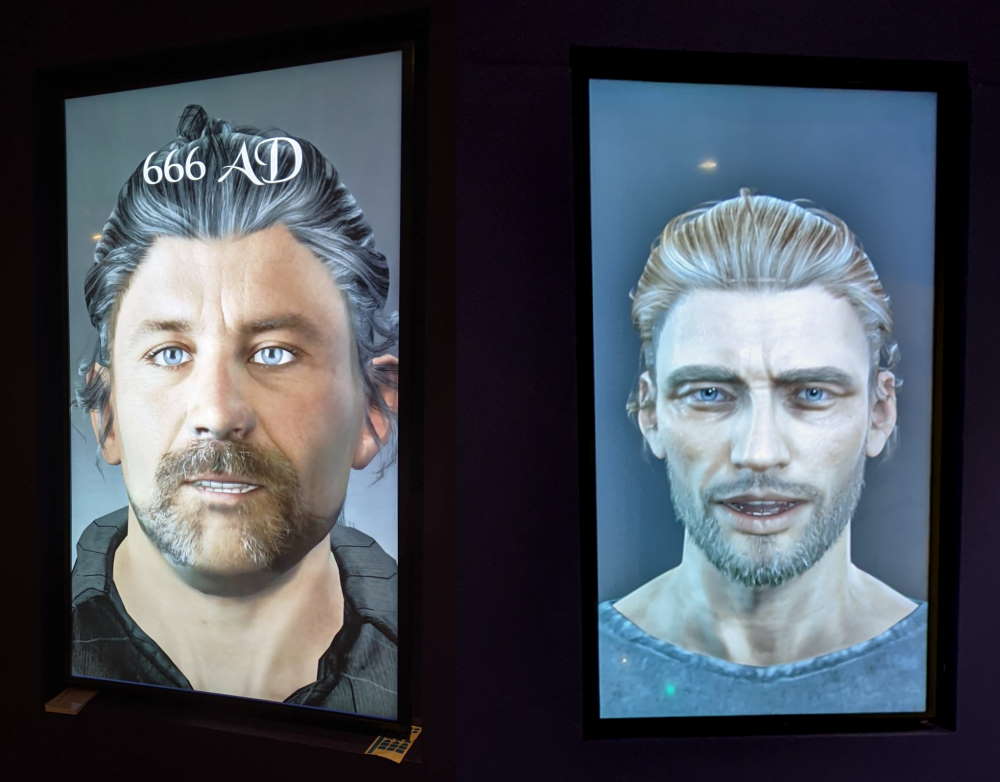