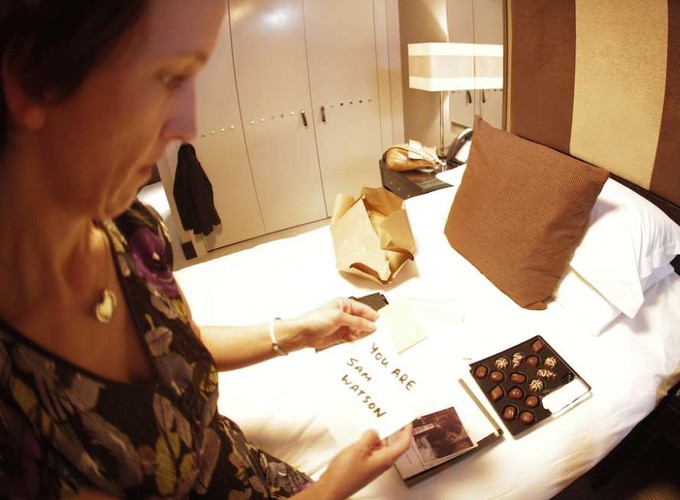 Agent in a Box (Working Title)

“Agent in a Box” (AiaB) is a project I’m working on with Katie Day of The Other Way Works and Alyson Fielding of Pyuda.  It can be thought of as a prequel to Black Tonic, an existing Interactive Theatre Experience developed in 2008 by The Other Way Works.

It was originally envisioned as a single player, time-limited experience for the intended audience of a business traveler, trapped in a hotel away from home.  As an alternative to watching hotel-room TV or replying to emails – why not take on your alter ego of a spy for an hour?

The story of AiaB pre-dates Black Tonic.  During this show, Lena, a hotel maid observes the actions of a Fukuenya (a private detective who specialises in breaking-up relationships).  The reason that Lena recognises these actions is that a Fukuenya had previously destroyed her relationship.  AiaB tells this story of Lena’s relationship break-up.

The player takes on the role of Sam Watson, a newly recruited Fukuenya, who is providing support to Anna, an agent in the field.  Sam will use her detective and investigation skills to assist in breaking-up the relationship between Lena and her partner Charles.

Anna has managed to arrange dinner with the target ‘Charles Hollingberry’. The player will be supplying information to Anna throughout this dinner. Anna will secretly sms the player, sneak off to the bathroom to call in, and on occasions leave her phone ‘open’ so that the player can listen in to the dinner conversation.

When the player arrives to check-in at the hotel the receptionist informs them that a package has arrived for them. Back in the privacy of their hotel room, the player will begin to unpack their ‘box of tricks’ – black magic chocolates with a hidden compartment containing a mobile ‘feature’ phone, a secret identity, notes about the ‘obstacle Lena’ and the target ‘Charles’, phone numbers of other characters etc. The player will use this information in order to carry out a number of secret-agent tasks including finding ‘dark secrets’ from Lena’s past to share. The player will dial into Lena’s mailbox, hack into her email account, and spy on conversations with her friends. All of this from the relative safety from their hotel room!

From the players point-of-view the game takes place entirely in the hotel room. This is the only real / physical world location. There are however numerous virtual / imaginary locations in the game.  The player will only communicate with these virtual spaces via their feature phone. At no point will the player leave the safety of the hotel room.

To help explain the concept we have created a short trailer with the help of the very creative Chris Keenan and fantastic acting talent of Jill Dowse.  I’ll add a link to this just as soon as the final version is complete.

I’ll write up some more notes from our development shortly – talking about the technology behind all of this and about our recent performances at PILOT Sites.