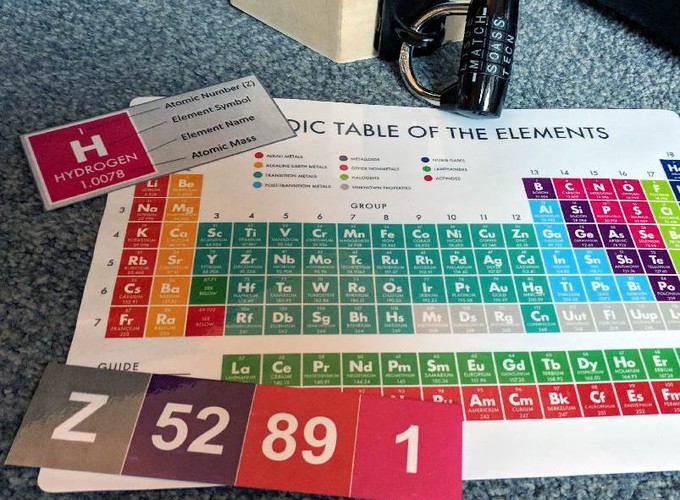 I’ve been fortunate to be involved in the fantastic GEEK play & games festival 3 times now. Once at Dreamland in Margate, last summer at the Singapore Science Centre in (you’ve guessed it) Singapore and I’ve just come back from GEEK in Beijing!  This time we were part of the inaugural – International Tinkering Education Conference at the Soong Ching Ling Science & Culture Center for Young People.

I partnered with the fantastic and delightful science communicator and game maker Ran Peleg.  We’ve previously collaborated to create Escape Game workshops for Ecsite conferences in both Porto and Geneva.  For Beijing we built a new Escape Game to showcase the power of collaborative games and puzzles for Science Communication and Tinkering.

We created 10 different puzzles to showcase 10 different aspects of Science – to show that Escape Games could be used to get people excited about Science.

Stephane Berghmans of Technopolis in Belgium had my favourite analogy of the conference related to science to music: 90/9/1 rule.

So our story is very much tied into the conference: The building’s automatic timer is about to kick in shutting down all the electricity to the entire building at 5pm.  This isn’t normally a problem but tonight is the big dinner for the Inaugural International Tinker Education Conference with over 300 VIP guests attending.

Unfortunately the Head of Maintenance is nowhere to be seen.  However, she has left a series of challenges that if they can be solved the power shutdown can be overridden and the dinner can take place.

We even tried to add our own bit of drama to the experience but starting the workshop as if it was us talking about Escape Games instead of playing them.  During our presentation we organised for the lights to go out and a concerned member of the conference team rush in and explain what was going on.

The game was designed for 30 players split into 4 teams with each assigned a colour.  Each team has the same set of challenges but with different solutions.  Every object in the room has a small coloured sticker on it – so when you find it you know whether it belongs to your team.  The immediate objects are placed on your team’s table – with others hidden in cupboards and on shelves around the room.  A number of objects in the room are shared between all teams.  And a number of puzzles are ‘cross-contaminated’ – so teams find pieces in their collections which they need to give to other teams.  This is to encourage a bit of collaboration between teams.

While it was limited to 30 players we had many more come in to spectate for periods of the game.  Although many spectators couldn’t resist contributing.

As it was also a Tinkering workshop we used a number of DIY pieces of technology.

It was very much about showing what could be made and then encouraging people to make their own.

So this is the first of my games that I’ve translated into Mandarin!  It was apparent very early on that even though we’d reduced and simplified the use of language in all our puzzles – the attendees to the conference would really struggle with the language.  (They were reasonably comfortable our Western Arabic numeral system so we’d used that with some of the puzzles).  We were lucky enough to have Mint Lui, one of the employees of Star Group, with excellent English Skills help with the translation, act in the video and voice the character of the Head of Maintenance.

The game was a huge success. I think our bit of drama at the beginning helped to get the attendees in the mood.  And even though the majority of the players had never tried a commercial escape room they got into the swing of the game immediately.

There was a great atmosphere in the room and the players only needed minor prompting from us as Game Hosts to keep things moving along.

The intention was to follow it up with a ‘making’ workshop however as the conference was running behind schedule this was trimmed down considerably to a short wrap-up talk.  Including directions to my free online guide to creating your own Escape Game with free android app.

As we were guests of Star Group, a Chinese company that specialises in the build of Science Museum Exhibitions, we received incredible hospitality throughout.  Once we’d finished working we went on a number of tours of the city sights and taken out for many delicious meals J

As this was my first trip to Beijing here’s a few of Beijing related takeaways (I doubt I am the first to make any of these observations!):

Huge thanks to Kate Kneale (and her team at HKD) who assembled the UK gamemakers and artists, and to everyone at Star Group especially CEO Yule Zhang who invited us to be part of his Tinkering Conference.  Wonderful to hang out with the other UK Artists Genetic Moo (who have also shared photos of our time together) and others from further afield: Frank Kusiak, Ryan Jenkins, Olle Bjerkas & Stephane Berghmans.  We had a fabulous time and hopefully we’ll all be back in Beijing to collaborate with our new friends in the near future!