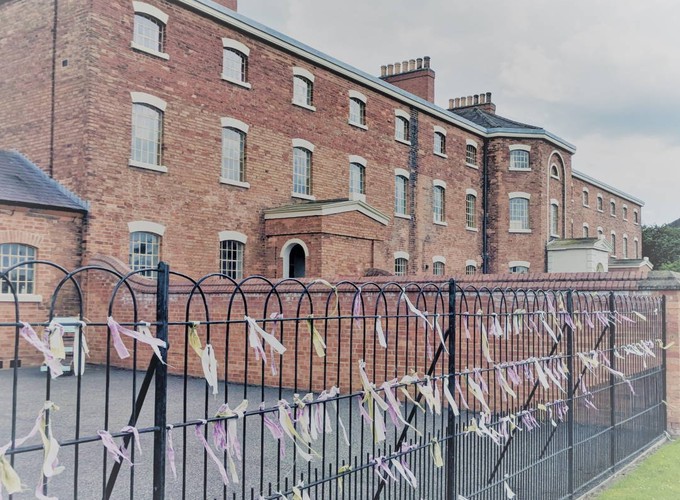 (This is really part 2 of a blog post about the ‘different ways I work with museums’. You can read this on it’s own or start with part 1 first.)

For this project Outside Studios found me (I think via the free tutorials). They were doing a large redevelopment over the entire Workhouse site and I would chip-in with the Digital Tour Guides.

I’m sure NT have better visitor feedback but I thought I’d just take a few quotes from Trip Advisor.  Some that mention the full redevelopment work of Outside Studios and some that focus on the Digital Tour Guide.

Every visitor gets a Digital Tour Guide

The idea is that NT wants to hand a device to each visitor on arrival.  NT will manage all the charging and set-up of the device.  The visitor just carries it and uses it to display content using NFC triggers.

The problem with building a tour for a handful of digital devices is quite a different one to building and managing for over one hundred!

As with any bespoke project there were a number of additional constraints:

You can probably tell that this is quite a long way from the free DIY version.

The Workhouse has a single entrance to the venue but multiple (often unmanned) exits.  This created a concern that uses would wander off with devices.  We added an anti-theft solution that if you took the device out of an agreed boundary it would go into an alarm mode. This could be reset by a member of staff or by carrying it back into the building.

The two most challenging of the constraints were:

In terms of managing that number of devices we needed step-by-step instructions for the front-of-house team to look after them, charge, reset them & give out to visitors.

Digital Guides are stored in batches and left on charge when not in use (we use magnetic chargers to make this process easier).  As new visitors arrive a batch is taken from storage to the front desk. Before being handed to the visitor the guide is placed on a tag to initialise it ready for a new visitor.  An audio error message will be heard if the battery level is low so it can be returned for charging.

There’s also a practice tag for the visitors to use so they get used to the idea I of scanning.

In the early testing I watched this entire process play out as a coach of 50+ visitors arrived together and was amazed by the speed & skill at which the front of house staff ‘onboarded’ the visitors – providing then with devices & instructions.

When returned the member of staff scans a return tag and places it back in the rack. This turns off all the services in the phone to maximise battery life & speeds up charging.

This is a reasonably straight-forward task if your devices have internet access. In the free version I’ve even used DropBox in the background to sync the content.  This isn’t a solution that I’d use on a commercial operation as who knows how DropBox will change their terms of service over the years.

And you need to be able to both update the content and also update the app (something Google Play store does for you automatically).

So, we need to replicate some functionality of both DropBox and Google Play store all the while being disconnected from the internet and without ever touching the screen (or even the physical buttons).

These are not insurmountable tasks but require a fair amount of work and testing.

I won’t bore you with the technical details (I’m happy to share if you are interested). The broad approach was to set up a local Wi-Fi and a Raspberry Pi running the custom server.  We thought about setting up a regular update during the night to check for new files – but decided against this since NT were keen to leave everything unplugged overnight. Instead, it can just be updated manually.  It’s not a frequent occurrence and takes about 20 minutes to trigger the process on all the devices.

We used low-cost android devices inside a custom 3D printed shell (designed by Outside Studios’ team). I like the Nokia 3 and have used them in a number of projects. If you’re doing this now you’ll probably have to hunt for an equivalent low-price android device.  We opted for the 3.1 as it has an 18:9 aspect ratio so gives the final product a very distinctive widescreen feel.

If you’ve ever set up a brand-new Android phone you’ll know this is a somewhat time consuming process. If you’ve got a lot of devices then you can use Android Device Provisioning – this is well outside the technical scope of this article. It takes a while to get it all working, but once you do you can blitz through the phone setup process. There are still some manual steps to do on each phone – but it was something I could do while watching TV. Setting up 100+ devices takes time no matter how much you optimise it.

Provisioning has the added benefit that you can completely lock-down the device. Even if someone stole the devices from National Trust getting them back to a working phone is well beyond the ability of most users.

The plan is that I take what I’ve learned / developed with each bespoke project and feed that back into the free versions. Taking the improvements I made to the custom app & updating the free one.  However, as the changes have been too numerous and potentially not beneficial to the majority of users, I decided to keep the changes separate for fear or breaking / confusing existing users.

Hopefully, I’ll find another project similar enough to build on these ideas. For now, this app has another purpose – the base I use for building Escape Games & audio tours. Get in touch if you have similar project needs!