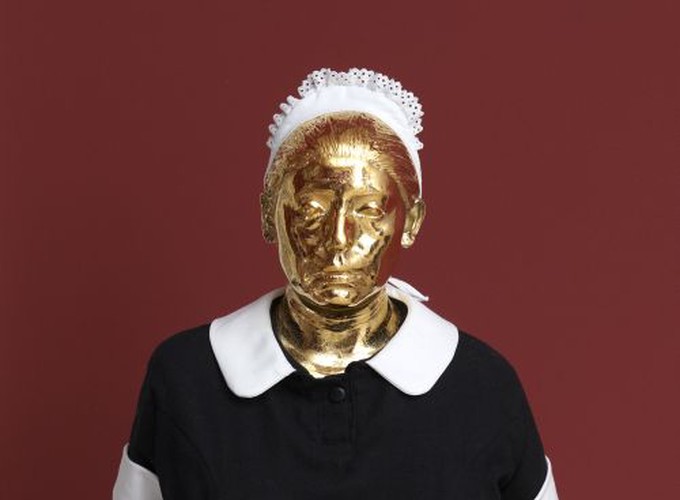 Tomorrow by Elmgreen and Dragset

Recently opened at the V and A Museum, Elmgreen and Dragset’s Tomorrow is an unrealised film script set in a fake London Apartment. It tells the story of Norman Swann, an elderly failed architect who is on the verge of bankruptcy and having to sell his inherited Kensington apartment in order to survive. On arriving in the Hallway of his apartment you find a pile of abandoned books, which contain the script to this unrealised film. You can explore Norman’s apartment with other house guests who may choose to follow the script or just wander around and enjoy the space.

E&D have used objects from the V and A collections along with their own artworks to dress the film set, previously housing the textile area of the museum. I have to confess to not knowing all but the most famous E&D works, so I didn’t notice these. But a little research since has highlighted a number of pieces although some made less sense in the context of this work. For example in the enormous living room, is a huge dining table with a crack along the centre. In the context of ‘The Collectors’ this is a metaphor for the cracks within the family. Keep a look out for works High Expectations and Unfinished Symphony.

I am a big fan of the ‘environments that tell a story’ idea. Where it’s not rammed down your throat but you can piece it together by examining the evidence. This probably stems from my love of detective stories – somewhere between narrative and game.

I found it a very rewarding and engaging experience to sit in the room associated with a scene and then walk around to look at the objects from the script. It created a high level of immersion, to the point that I wanted to correct things that weren’t in the right place. A book is described at a location on the shelf and when I found it in the wrong place I had an urge to put it back. However, due to this ambiguity of how much you can explore I left it unsatisfactorily out of place.

The work suggests that you play detective and explore the apartment finding the clues and yet also tells you to be respectful of his space and belongings. This creates an ambiguity about what you can and can’t touch. One of the scenes involves an old rotary telephone, I made the mistake of sitting in the chair next to the phone and was immediately told by the butler that it was forbidden to sit there.

As someone who builds collaborative experiences, I am always fascinated by creating meaningful connections between strangers. I like seeing that others are having a similar experience even if it is somewhat independent of mine. In the living room, a number of sofas mean that you can often alongside others reading their own scripts.

The object that succeeds in this the most is the piano. It is referenced a number of times in the script – and can often be heard ‘off camera’. However, it is only played by other house guests so it’s connection is very much a chance encounter. My favourite moment was while sitting in the bedroom reading the associated scene and a butler invited another house guest to play the piano. The scene involved actors playing the piano and became so much more with the guest’s playing. I paused to listen at a point in the script where the piano. I had enjoyed the experience so much I wanted to thank the other guest for their musical interlude.

Designed as a film set first – less about the movement of guests around the space. I felt it could benefit from a few more seating areas with suitable lighting. To read the bedroom scene while in the bedroom is close to impossible. Personally, I’d like to see environments that are more ‘safe’ and perhaps even ‘playful’ so that guests feel comfortable to properly explore.

Overall an unexpectedly fascinating and enjoyable experience and highly recommended. Allow 30 minutes to explore the space but around 90 minutes to properly engage with the script. You could easily spend much longer – there are so many little touches that make the exploration rewarding.