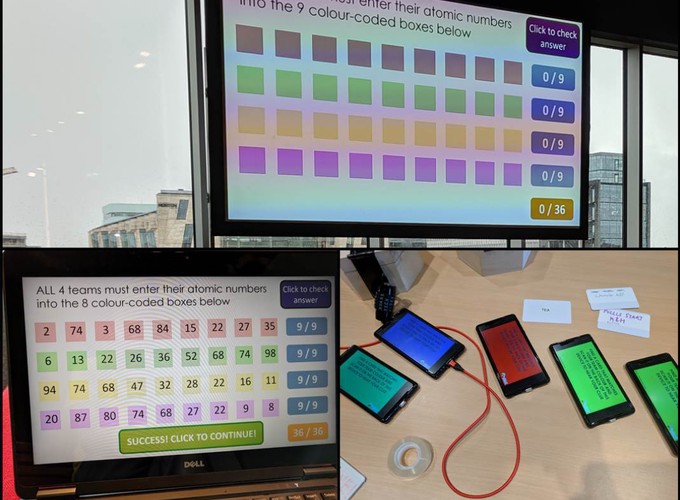 Pushing Boundaries: Ecsite 2019 at The Experimentarium in Copenhagen

I’ve just returned from a fantastic week in Copenhagen at the 2019 Ecsite Conference – Pushing Boundaries hosted at The Experimentarium in Hellerup.  It was my 4th Ecsite, having contributed to previous Ecsite conferences in Graz, Porto and Geneva.  Here’s some details from Ecsite 2017 in Porto where in 2 days we built an Audio Game, Darwin’s Rabbits for their Botanical Gardens.

Here’s a list of my Ecsite involvements over the years.

Ecsite has always had a big appeal for me – not only due to the exciting talks on the Main Conference but also for its pre-conference.  These are the two-days before the conference-proper begins where people can pitch to run 1- or 2-day workshops.  Normally at museum conferences workshop sessions are limited to 45 minutes or maybe an hour and barely enough to scratch the surface of a topic.  The Ecsite pre-conference is a fantastic way to get much deeper into a subject and allows us to run more crazy events which are more akin to GameJams!

It’s obviously a huge undertaking of those who volunteer their time to organise and run but it’s great to be involved in some of the amazing projects that have come out of these pre-conference sessions.  And hopefully once again we’ll kickstart some amazing game discussion and creations across Europe and even further afield.

So, before I begin – a shout out to my fellow GameLab volunteers who put in a huge amount of time and energy (before & during) to make our pre-conference, main-conference and fringe events a huge success every year:

Kate Kneal, Malvina Artheau, Ran Peleg, Daniela De Angeli and this year’s newcomer Rannei Simonsen.  It’s wonderful to be part of such a talented and dedicated team who are willing to share their time and expertise with conference attendees.

The 3 top facts from my trip:

2019 was a special year for Ecsite – 30 years since 100 Science Educators first gathered in The Hague for the first ever Ecsite. It was also the the first time in my visits that Ecsite took place outside of a standard Conference Venue.  This was a huge attraction to attending this year – almost every aspect took place in one location and that location was The Experimentarium.  Usually we are shuffled around between numerous venues – not necessarily a bad idea – but it was great to have a home for once.

So for the past four years I have been involved as part of the GameLab core team.  The GameLab can be thought of as a fringe event to the main conference. It is a single space focused on play.  Sometimes it is a place for talks, workshops and demos (often those that prefer a more unusual location) and other times it is a drop-in location where attendees can relax from the main conference, play some games (either Science / Museum focused or more regular board games).  And usually if you drop by you’ll find Game Designers / Developers working on their own projects or happy to help you with yours.

This year I was involved in:

As you can see it was pretty non-stop for me.  And I must have upset someone in the scheduling department as I had a 9am session every day!  I think it’s worth going into more detail about the Museogamix workshop and ‘The Escape Game Demo’ Session.

I referred to this two-day workshop as Game-Jamming but that’s a bit of an understatement really as to what is involved (not that it’s straight-forward to host a Game-Jam).  The pre-conference is much more structured than a typical Game-Jam.  Our goal is to guide teams to develop a complete game that can be played by the wider conference attendees during Nocturne.

We don’t assume that anyone has any games or technical experience when they arrive.  We spend the first half of day 1 – playing and deconstructing different games and technologies.  This year that was two Escape Games, a variety of board games and a number of social games.  Ran and I both presented our own Escape games.  Ran’s focus is on a game designed around science – so actually mixing chemicals in order to complete puzzles.  While mine is a table top game using a variety of technology & puzzles – so it functions as a good way to begin some simple DIY technology training, based on my series of free museum tutorials.

After lunch we start to introduce the venue and the problems that we’d chosen as starting points for this year’s games.  Our problems revolved around awkward spaces:

This process forms as the basis for team section and idea creation.  We let the teams come up with their own ideas and then we work as consultants and sounding boards for the teams as they try to hone their games.  In some years we have been a bit more hands-on and joined the teams to push them along a bit – but the teams we working so well together this year we supported more from the side-lines rather than disrupt their flow.

By the end of Day 1 we hope that each team has a reasonable idea of the game that they will build on Day 2.

This year Kate and Daniela joined us on Day 2.  This was a good way to introduce some new energy into the development.  They were able to talk about their own practices and give the teams new ideas.

After this – teams presented their games back to the entire group.  This enabled us, the organisers, to have a much better understanding of where they were after an evening off to think about their games.

Then the focus is on making – we float amongst the teams – hopefully giving them enough time to work on their ideas but with us available to nudge them along the right track and where needed get involved either in the technology or game design mechanics.

Soon after lunch teams prepare their games for play-testing with other teams (and organisers) giving valuable feedback.

The final sprint is taking this feedback and preparing something that is playable at Nocturne.

We were fortunate to have an amazing group of attendees who went on to make 4 different games that were all successfully played at Nocturne (those games are for another post – or I will link to them if the teams write about them).  On graduation of the Museogamix – all attendees are welcomed to the GameLab family (totalling well over 100 now) and are able to get involved in future years.  Perhaps we will pass the GameLab baton on to some of those in the near future.

I think this session is invaluable to attendees as while many are familiar with an Escape Game – it’s still a big leap to what a Science-focused one would look like.  This is an opportunity to play one and to hear some of the details of how we constructed this.

We rand a similar experience in 2018 and it was hugely popular – even in a space well off the beaten-track we were hugely oversubscribed.  In 2018 – all the organisers brought a selection of their own puzzles and we assembled them together to make a new game.  It was important to us that the 2019 version used an entirely different set of puzzles and technology.  This was to ensure that we were showcasing the latest Escape Game thinking as well as providing an entirely new experience for any returning attendees.  This year we adapted an existing Escape Room based on the Periodic Table built by the Weizmann Institute of Science – I’m sure you don’t need me to tell you that 2019 is the International Year of the Periodic Table.

This session was presented by Dr Ran Peleg, Dr Malka Yayon, Dr Shelley Rap and myself.  Malka and Shelley had built the larger Periodic Table Escape Room which we were able to reduce down and both Ran and myself added elements of technology.  While the original game has 18 puzzles to solve, this version had just 9.

What makes this interesting is the format for puzzle solving:

I contributed two pieces of technology:

The session finishes with a brief discussion of how everything works and how attendees might wish to use the puzzles & technology in their own venues – either within Science Centres or on tour away from their venues.

So Ecsite have already announced the next two conferences for 2020 and 2021.

– although neither is set within a Science Centre – hopefully the pre-conference will be located at one to give us some existing materials for pre-conference workshop inspiration.

The GameLab team are already discussing how we might be involved in these next conferences or whether it’s time to allow new volunteers to take over.  So, if you are in any way interested in games and science then please get in contact and I will talk you through how to be involved in future years.

Overall a fantastic week and I loved Copenhagen (and my short escape to Malmo) but didn’t make it to Tivoli Gardens this time – so hopefully not too long until I get to visit again.